"SiN Episodes: Emergence" was the first of a planned nine-part sequel to the original SiN.

Freeport City is a bustling, futuristic megacity with a population of 27,000,000 and described as a mix of New York, San Francisco, and Tokyo. Areas that are featured in Emergence include the Freeport Docks, SinTEK's Supremacy Tower, and Radek's hidden drug lab on board a beached, derelict oil tanker.

SiN was re-released on the Steam platform on April 5, 2006 bundled together with SiN Episodes: Emergence. This version of SiN (version 1.12) includes fixes for audio and video playback problems as well as integration with the Steam multiplayer server browser. Several textures have been modified in this release apparently due to copyright issues (the original images of many being replaced with SiN Episodes artwork) and all instances of nudity and drug references in the game have been censored.

A sequel, SiN Episodes, was made by Ritual and was intended to be released episodically over Steam network. The only episode, titled "Emergence" was released on May 10, 2006.

An alternate reality game based in the SiN universe was launched in 2005 to promote the announcement of SiN Episodes. Various cryptic puzzles could be found on the website, and solving these would lead to new pieces of media and art. However, support for this piece of viral marketing by Ritual Entertainment did not last, although it has been claimed by Ritual that the final puzzles still remained unsolved. 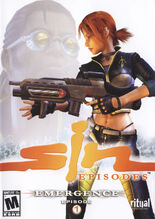 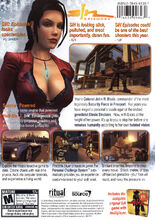 Box - Back Cover
Add a photo to this gallery

Retrieved from "https://sintek.fandom.com/wiki/SiN_Episodes:_Emergence?oldid=441"
Community content is available under CC-BY-SA unless otherwise noted.