"SiN: Wages of Sin" is the first and only expansion pack for SiN, developed by 2015 Games and originally released on February 26th, 1999.

Following the disappearance of Elexis Sinclaire, Wages of Sin continues the storyline by introducing the new villain Gianni Manero, a mob boss who seeks to gain power from the leftovers SinTEK. Manero produces new genetically engineered mutants under secret supervision, but when some of these mutants break out and run into the city, the elite security force group HardCorps becomes aware of them and it's up to HardCorps leader John Blade to set things right.

Blade's hunt for Manero leads him to new locations of Freeport City that were not included in the original game, features new enemies and weapons, and has such interesting story/gameplay elements as the kidnapping of a scientist's daughter and day/night scenarios of the same levels, depending on the player's choice.

While keeping the interactivity level and the real-world level design of the original game, Wages of Sin adds a few extra elements beyond the standard weapons and enemies upgrade. Wages of Sin features new enemies, locations and weapons, as well as items like flashlight, nightvision goggles and ropes. A multiplayer game type called Hoverbike deathmatch is also included in the game.

Wages of Sin is an add-on utilizing the same technology the original game is based on. However, great attention to detail and interactivity was kept when 2015 designed Wages of Sin, resulting in even more options and visual treats than Sin could offer. Also, the locations the player character visits greatly expand the Freeport City experience started in Sin, and because Sin moves out of Freeport at about halfway through the story, the add-on bases the whole adventure in the city and lets the player visit such locales as a cargo ship, a vacant building, a nightclub and Manero's casino and penthouse complex.

Many special effects are impressive even today, such as a spider emerging from the body of a shot mutant or the earthshaking fireball explosion of the IP36 nuclear rocket launcher.

On the audio side there is some new music, new sound effects and brand new voice acting from the same actors who voiced Sin, plus some new voices (like Manero's) specifically for this add-on. 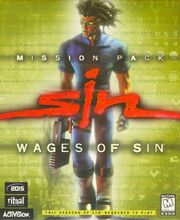 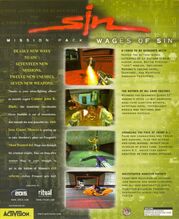 Box - Back Cover
Add a photo to this gallery

Retrieved from "https://sintek.fandom.com/wiki/SiN:_Wages_of_Sin?oldid=438"
Community content is available under CC-BY-SA unless otherwise noted.